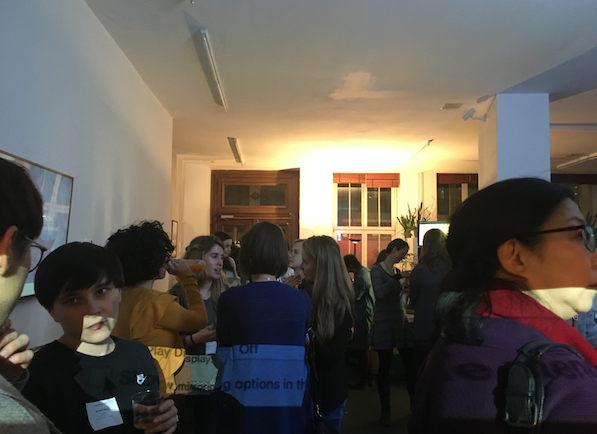 Yesterday our Ladies that UX Berlin community celebrated its first anniversary (and it was awesome!). Time to reflect a question which often occurs: Why do we „separate“ women from men?

Here is one explanation based on social psychology, namely: stereotypes.

First, working environments in the tech industry (which is including user experience) are still male-dominated where women are a minority/underrepresented group, plus, in addition, user experience roles are often associated with consulting, management or leadership roles (see, for example the glass ceiling effect).

Fourth, and now comes the interesting part, there is a well-known phenomenon which is called stereotype threat.
What does that mean? The stereotype threat theory was first mentioned by Steele and Aronson (1995) in their study and formulated as follows:„Stereotype threat is being at risk of confirming as self-characteristic, a negative stereotype about one’s group.“

There are significant consequences that can arise from stereotype threat: e.g when performing in a test situation the test performance of the people who experience this phenomenon is negatively influenced. This is because their cognitive performance decreases or simply said: the brain is‘ busy’ with other things, namely the processing of the stereotypes and subtle negative emotions associated with that.
In addition, the phenomenon also has an enormous impact on, for example, the choice of profession and study, as people distance themselves from the areas that are perceived as a‘ threat‘. (well, we all know we as humans like to avoid negative emotions)
The whole thing ends, so to speak, in a self-fulfilling prophecy and leads also to little identification with the areas perceived as a threat.

Why does this happen – or when does this phenomenon occur?
Steele and Aronson’s studies have shown that the performance of persons in a minority situation (e. g. women in male-dominated areas like mathematics or physics) in performance tests or situations (like the industry/job-related meetup is one) is worse when the relevant stereotype is aware and activated of the testing situation. This activation could happen by eg making a statement like described in the example below or simply by the awareness that one is a minority within a majority (eg women in a male-dominated environment).

For example, it has been found that women, who are casually confronted with the statement that „women are bad in mathematics“ prior to taking a maths test perform much less effectively than women in the control group, where this stereotype has not been activated. Here a so-called priming of the test persons takes place through the statement „women are bad in math“, i. e. one activates an information which is normally implicitly/unconsciously present (my age, my gender, my nationality, my sexual orientation) but through a concrete statement which refers to this information or the concrete question about these facts is activated and thus becomes conscious.
One is reminded, so to speak, of how old one is, what gender one has etc and this is linked to associations of how the environment perceives me.

In addition, there is no explicit upfront statement about negative performance necessary: This kind of awareness or activation of the unconscious information ( „I’m a woman“ or: „I’m a transgender“) could still be found when the persons find themselves in a minority situation, like for example women in tech environments.
Social-psychological research shows that people become particularly aware of group affiliations whenever they do not fit the context or have some unique characteristic or attributes within a group e. g. when you are the only woman (or the minority) in a group of men (or vice versa). For relatives of social minority groups, negative prejudices about their group’s ability to perform in performance situations (where members of their group are underrepresented) are therefore easier accessible in terms of cognition. This, in turn, increases the likelihood that these stereotypes have a performance-reducing effect as described above.
In conclusion, this threat could have inhibitory effects when it comes to asking public questions in a meetup (eg showing „weakness“, associated with performing „bad“) or standing in front of the crowd and for example, announcing something etc and therefore: yes – it is necessary to create those environments!