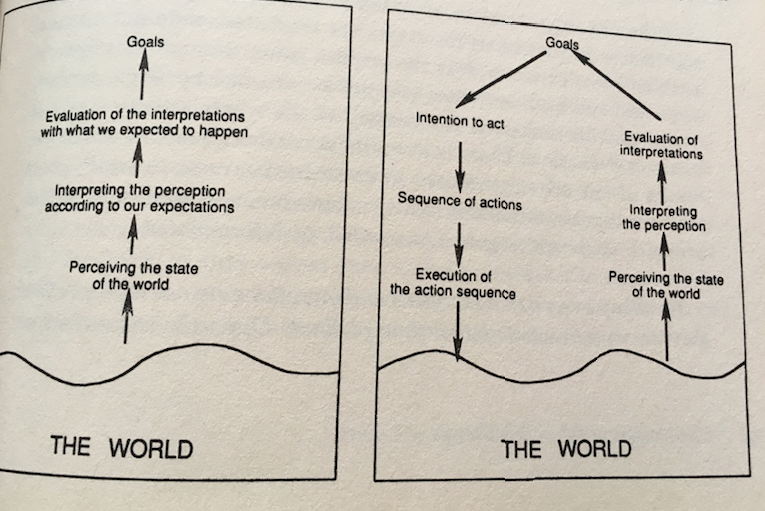 Don Norman’s famous book „The Design of Everyday Things“ which was released in 1988 has had big influence on the fields of human computer interaction and user experience design.
One of the topics he covers in his book is a model/framework of how people act when they’re interacting in the world to reach their larger goals. This model is called the seven stages of action (or Norman’s Action Cycle)

The model belongs to one of the most famous Interaction theories that have been used to model user behavior, evaluation, and to set up policies like to create user-friendly interfaces. The model can be divided into an execution phase and a phase of the evaluation.

It starts with the execution part

After the execution part , the evaluation part begins

This model can give us insight into ways that systems can fail or cause problems in supporting peoples larger goals and actions and it can help us to adapt the design towards users goals when designing for people – for example by making options visible (which helps with the execution part) and giving proper feedback (which will help with the evaluation part). Norman refers to problems with those parts either as “Gulf of execution” or “gulf of evaluation”

An example of the gulf of execution

And here is a good example of the gulf of evaluation: Do “WALK” Buttons Actually Do Anything?

Both examples could be also filed under: how to make people feeling like idiots :)

See also: Norman, Donald A. The design of everyday things (1988)