How do we find what we are looking for? And how do we do it?

Visual search deals with the problem of how we find what we are looking for (relevant things) in a world full of things that might also be irrelevant to us.

Visual search is necessary for our daily life. Imagine we have to process all the information in our visual field at once. It is simply not possible because of our limited cognitive capacity. Visual search is also very important for design.

END_OF_DOCUMENT_TOKEN_TO_BE_REPLACED

„We see the forest before the trees“

How do we perceive objects? Classic theories of object recognition (so-called feature theories) often claim that we first process specific features/details of something followed by a more general processing. This is not true: There is strong evidence that our visual system is designed that general (or global) processing is typically prior and quicker compared to detailed (or local) processing. For example: Generally, words are recognized before its individual letters. However, this effect does not always occur: it could be manipulated by instructions to focus either on global or local items more – or simply by putting smaller items (local items like for example letters of a word) of an object further apart or make them bigger.

This coarse-to-fine way of visual perception is also supported by neuroscience. Several studies (Musel et al., 2012; Flevaris et al.,2014; Livingstone, 2000) found that visual processing develops over time – even if it seems instantaneous to us. In the following video neurobiologist, Dr. Margaret Livingstone demonstrates that a focus on so-called spatial frequencies (it claims that the visual cortex operates on a code of spatial frequency, not on the code of straight edges and lines) could help to explain why the smile of the Mona Lisa is so elusive. 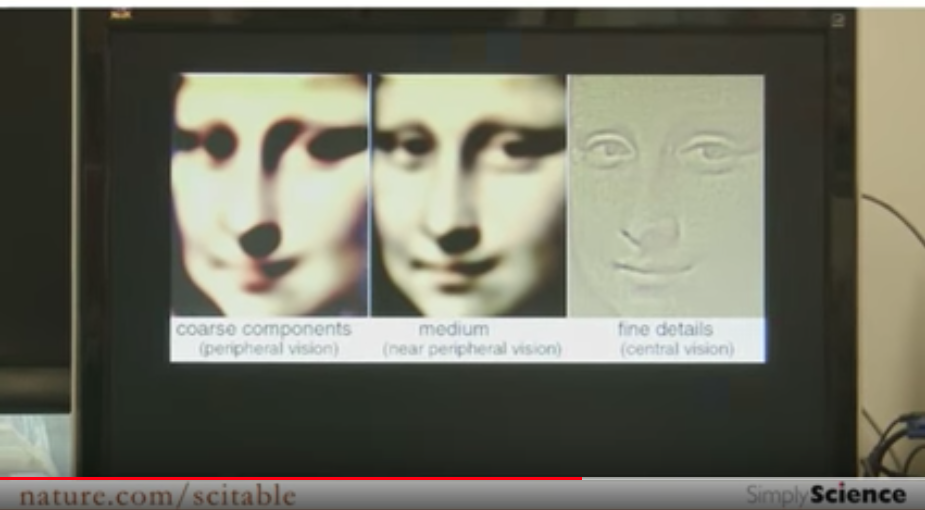 Implications on design:
So, why could these findings be interesting for (interface) design? Findings like this can help us to focus on simplicity in e.g icon design where people often will have a much harder time to recognize an icon when it is designed with too many details, which may be perceived as distracting or even somehow unpleasant simply because it takes longer for humans to process the details (= more cognitive work to do).

It may be also important for the topic of visual hierarchy or: the arrangements of all the elements in a design which makes sure that one can find the way to the information needed and which separates important from not-so-important information.

Despite the fact that we know that people normally don’t change their sizes so fast this knowledge – which is normally used to estimate our size and distance perception – is simply overwritten by the cues suggesting the wall is at right angles which creates a visual illusion of parallel walls in the room.